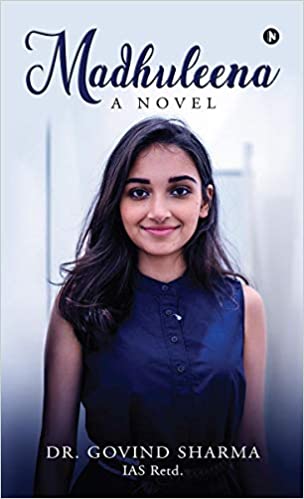 Title - Madhuleena : A Novel
Author - Dr Govind Sharma IAS(retd0
Genre - Fiction
Publisher - NotionPress
ISBN - 978-1649516831
Dr Govind Sharma IAS has written a few novels prior to this which includes "The Dev Anand Story", Anant Dot Com, State Vs Amrit Kumar, The Break Up Clinic and Of Aakash and Aarti. I ahve had the privilege to read and review all of them. This time he is back with Madhuleena - A Novel.
The story is not an usual one. The book comprises of 143 pages and the novel is set to happen between two different sets of characters though they finally meet at a point in the end. As the synopsis clearly mentions, this is a novel about "Honey Trap". How carefully this is planned and laid, making big industrialists or influential people fall on it has been explained beautifully in this novel. Kudos to the author for that.
Aakash Lal aka Aakash was an orphanage and was raised by a person whose family members had a strong financial background. Though he had some petty cases in the past, they did not mind it and appoint him as a staff in Padmja Bank which was run by the family. However things take a different turn when he was accused of stealing a huge sum of money from the bank lockers though he was innocent.
While he was on the run. he meets Madhuleena and falls for her eccentric beauty.  On the other hand, Dr Chawla was having an illicit affair with Sonali, who was married to Vikrant. Despite of swindling money from the unsuspecting couple, he too falls into some trouble.
The sequence of events that happens post this wherein Aakash is forced to be in a disguise, his subsequent meetings with Madhu, conspiracy to eliminate him, helping hand from Baba etc., makes this novel a good read.
This book is available on Amazon.

This is my new novel which is a totally engaging love story set in the backdrop of bank theft and honey-trap.