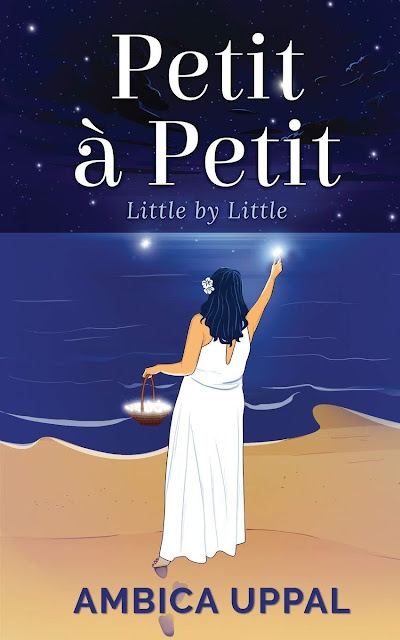 Title - Petite a Petit : Little by Little
Author - Ambica Uppal
Genre - Poems
Publisher - Notion Press
ISBN - 978-1646509539
This is a collection of 75 poems which would make a worthy read. The poems are centered on themes like self-love, self-confidence and most importantly taking life into your own hands(wordings as per the poetess/author which I don't have any right to change and hence mentioning it as it is). So, the message is loud and clear. The poems that find its mention in this book aren't mere words but a powerful compilation which would slowly take you into the author's world, which isn't an illusion...
I like dreading all of them but wanted to mention about a few in order to prove that my praising over these aren't exaggerated but is driven by the magnetic lines which is definitely worth your time and money. To begin with, I must mention that the book is divided into 5 parts and each part carries few poems under it's head. They are:

The magic that you hold - 16 Poems

For some, I am mentioning only a very few lines/extracts from the actual poem which leaves an everlasting impression on the mind of the readers.

Just because you couldn’t melt.

There’s more than what meets the eyes That can be touched and felt.

~More colours than black and white

Things will change for the better - A need of the hour poem since the entire world is under a lock down with so much of stress and other issues which has impacted many individuals and businesses worldwide.

Topic - The magic that you hold

Letting in the ray of belief in your day And creating a place where darkness Cannot stay.

~Belief, that dose of magic

For all you need

Is your own magic

To wipe away all your griefs

~The magic that you hold

You don’t decide which side you are on.

When the rainbow sings its magical song, The clouds may burst on the side where you Stand

Or on the opposite side of the dry land.

Phoenix - This poem has some real powerful wordings which would influence he readers, for sure.

“It’s something that drives away the blues.”

He told me to see my life as a canvas

That I can paint in with my form of art And any point in life is a good start!

~You are the painter of the canvas of your life

In your life’s tale.

It may be that wind beneath someone’s Sail!

~You have the universe within yourself

Evolve - One of the other poems, I liked the most under this heading.

In fact, the poems that were covered under this were more intense compared to other poems. Hence do not miss it and this section would require additional concentration/time to read.

Don’t push your heart to the ground When it’s meant to fly.

It’s telling you a lie.

Close the doors to hate

And open them to the opportunities, Yes, with every sunrise.

The poems under this topic are short and quick read.

Give your dreams wings.

Whoever tells you otherwise Is telling you a lie.

The nights will glide

And burst in light,

Giving birth to a brand-new day!

~Tomorrow is another day

Today, you have fame.

Tomorrow, no one may even know your name.

Today, your heart may jump high with joy. Tomorrow, the slightest thing may annoy

~Tomorrow will be a new day

How true are these lines 👆

My overall impression is - Ambica Uppal has penned some of the most beautiful poems which also has the intensity coupled with reality making you to realize your potential and not to get bogged down by few incidents/events since world is a better place to live. I loved her writing style which is different and is well complemented with some beautiful illustrations which were done by herself along with Anika Sagar and Ashween Kaur Lamba. These illustrations are a real good ones and gives additional support to the poems wherever it has found its place.