Book Review - The Saga of Shom and Raima 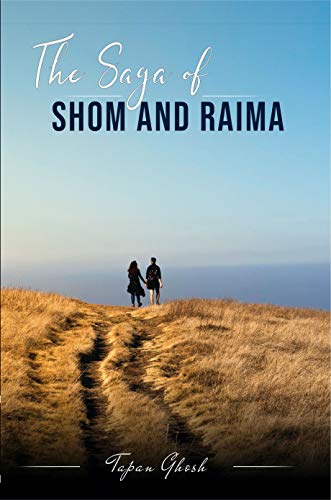 Title - The Sage of Shom and Raima
Author - Tapan Ghosh
Genre - Fiction (Romance)
Publisher - BecomeShakespeare.com
ASIN - B08BJ3W55Z
An unconventional story with a classic approach is what makes this story, a special one. Tapan Ghosh has recreated the magic of love in an unusual way which is not only appealing but also makes it an interesting read. This novel is strictly for ADULTS!!
Firstly, I was impressed by the cover page. Though one should not judge the book by it's cover, the first impression needs to create that interest in you automatically. The fonts used compliments to it. If you look at the cover page deeply, it gives you the exact meaning of what you can expect in the story. I am not going to talk about it in detail here but only about the synopsis and few things, I found interesting in this novel.
Suman Bhatia aka Shom was more than blessed since he was having a great career and a loving family but something was bothering him. When you delve deep into the story, you would start realizing it. The novel is set to happen in 3 different time periods - 1950'S, Late 2000 and present day/year. Hence the story has lots from the past which serves as a basis in the present.
The novel has 61 chapters and the initial chapters had some beautiful poems which is worth mentioning here:
Shom:
Your path is the same, I am blessed
If your goal is set, I like that the best
Tell me so, let's have faith in each other
If we're in love, let's think together
Raima:
If you could only look into my eyes
And read my mind likewise
The depths will tell you about my compassion
You will then stop asking stupid questions
These lines clearly establishes the author's supremacy over poetic knowledge as well. You will find around 10 such poems(I did not count it to exact numbers)  which includes a much lengthier ones as well and some in Hindi too.
The story also has some references from Tapan Ghosh's which includes:
You have to be an actor to face life, not the camera.
Harry plays the role of Godfather to Shom and Raima. He plays a vital role in setting things right as and when required. His piece of advice given to the lead characters stands out as these were based on realities. The narration of the past which includes Cindy and Dilip shouldn't be missed. Raima has had a troubled childhood since she loses her parents at an early age and she gets constantly nagged by her uncle who sets his eyes on her.
Khush too had an unusual past. He is a close friend of Shom had hots on Swapna where as Swapna was more attached to Harry. Swapna was like a motherly figure to Raima who raised her like her elder daughter along with Natasha, her own daughter. But the best part in the story is the introduction of LGBT angle which involves some of the main characters which might be a shocker to you but nevertheless, the way the story was formed is done in such a way that you would not feel different or awkward. Though this is yet to find its support in our country, the way, the portrayal was done, is immaculate.
Harry's answer to balancing the two - The Heart and the Mind was stupendous. You certainly wouldn't want to miss those Power lines... Harry acts as the one stop solution for all the woes faced by these characters who invariably end up confessing to him and get the best suitable advice.
The way the hot and steamy sexual encounters between Shom and Raima and the ones between the other lead characters(read it in lines of LGBT angle) would make them a perfect mood arousing scene for the readers.
This story is a perfect web series/movie material. Usually I manage to read 400-500 pages in a single day but due to the complexity of the story and the characters involved, I took two days to finish reading the story. The story is set to break all the taboos which are existing in our country which involves Widows, LGBT, Age difference when it comes to falling in love/marriage etc., to name a few.
Last but not the least - Why did Shom and Raima decided to stay faceless?
This book is available on Amazon.