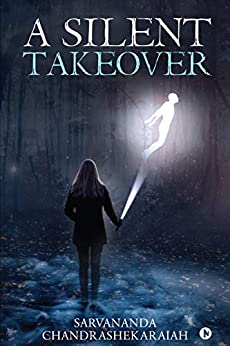 Title - A Silent Takeover
Author - Sarvananda Chandrashekaraiah
Genre - Fiction(Crime/Thriller/Mystery)
Publisher - NotionPress
ASIN - B08F2SCP53
An amazing thriller which would surely qualify to be made into a web series. One of the most interesting fiction novel that I have read in the recent times. The imagination of the author is surreal as it would keep you guessing until the end.
I loved the cover pic which is kind of intriguing. I liked the flow in particular since it was seamlessly smooth without any hiccups or break. Each and every character was given prominence. The best part is, the story offers the combination of all in one - Love and Romance, Thrill, Mystery, Emotions all rolled into one.
When the ailing SuperStar Raaj Kumar Muthodi had a tiff with the Press during the celebrations of his 50th Birthday, he decides to take a break in his career. He retires to his farmhouse without letting anyone know about it. On the other hand, a young intern from a tabloid decides to take up the story of the Super Star. There was a reason behind this. All his previous girl friends had either died by committing suicide or suffered mental illness.
The list includes Maha, Sanjjanaa, Soya, Ribha, Maya, Aarthi, Rameha, Priya and Veronica. The case looks real complicated once Suhaasini, the journalist starts to follow the trail and though she gets assisted by various people from across various places, there was something which she keeps missing. The doubts cast on few of the characters also turns to be dead end when something unexpected happens.
So who was responsible for the fate suffered by the wannabe actresses/girl friends of Raaj Kumar?
Was he hiding something from the public?
Or
Is someone close to him or the ones he trusts does all this?
If yes, what was the real intention behind it?
Read this gripping novel since it makes you feel good since when you are about to zero in on a suspect, it gets diverted which keeps you on your toes and guessing until the end.
A perfect read during a rainy season, in the evening or at night(if you are a night bird) with some snacks.
This book is available on Amazon