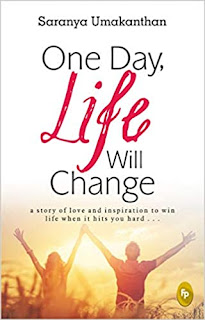 This is an excellent and an inspiring fiction novel from Saranya Umakanthan. The protagonist of this novel is Samaira Ranjan. She gets married to Ashish initially and was having high hopes of having a happy and an everlasting married life but was short lived.

She gets abused verbally and physically which prompts her to apply for divorce. When she reaches home with this news(since she did not reveal it to her parents), she gets another major blow. The series of unfortunate events/incidents that happens after this reminded me of a Tamil proverb:

பட்ட காலிலே படும்
கெட்ட குடியே கெடும்
I learnt a new word called "GOOGOLPLEX" though many of you might have known prior, finds a mention here with a reference to GOD that the number of requests made to HIM "and why only me?" would have surpassed this number. Those who do not know this word, kindly Google it ;-)
When she thought everything was lost, she meets Vivian Andhera. This meeting was explained beautifully in the novel and I particularly liked this sentence “He breathed in her feminine, floral perfume” which highlights the Law of Attraction in a candid way.
Vivian, CEO of Creative Tanks with around 5,000 employees hires Samaira. Samaira had Preeti, Shreya & Praveen as her friends in the organisation. I had an intuition that this novel also gave a feel of watching the tele-serial "நீ தானே என் பொன் வசந்தம்" though the story lines of both of them were entirely different.
Though Vivian liked Samaira very much, destiny had different plans. Gauri Ma wanted him to get married to Kushi. There are few twists in the story which would keep you captivated till the end. There is one more line which would evoke inspiration among the readers which goes like this ->
“When you are appreciated, don’t be modest... don’t deny it. People praise you only when you deserve it”.
How  true are these words...
Saranya has done a great job by penning a story which has the true essence of Love coupled with tolerance, forgiveness, motivation, inspiration and many other, all packed in one story.
Last but not the least, I wanted to end this review with another favorite line from the novel
“Samaira saw his dream in her eyes, and Vivian saw hers in his”.
This book is available on Amazon.