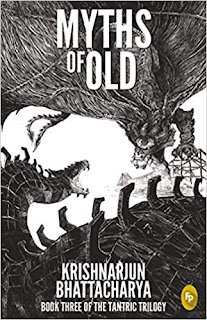 What should I say about this book?

I am dumbstruck with the sheer brilliance of the book. It would give you a feel of watching the movies like “The Lord of The Rings” and the ever-popular tele-serial called “Super Natural”

I also do not use this statement “Value for Money” that often but for this book, it would perfectly fit the tag line.

Firstly, it is a great story.

Secondly, the volume. Yes. The story runs for close to 600 pages which means it would take not less than 2 days (if you are a speed reader) to finish reading it and for normal/slow readers, almost a week.

Here, you should note that the volume is close to 600 pages (572 pages to be precise) after the editing. So the actual story would have been not less than 1,000 pages. What a work…

I must give you a word of caution here that you may not get to remember all the characters in the very beginning as there are way too many. If you have a good memory, it is well and good else I would recommend you to take notes. I did the latter not because I have a bad memory but I wanted to go with the flow rather than getting stuck somewhere in the middle.

The story begins with Dhananjay - hunter & the holder of Keeper Piece. He gets followed by a stench smell though he could not figure out what it is all about since his wife Era was with him. They were in search of their son Wodan.

What happened to him?

Then there is this demon Chaya who comes as a messenger of Asag (very powerful demon which is hell chained) seeking help from Adri.

Below are some of the characters/names you might want to remember:

Maya leans shadow blink technique from Daan. She was too good for him.

Adri Sen – the protagonist of the story and the son of Victor Sen who is the first and the only one to break out the unbreakable Bagchi prison. Initially, he was a prisoner along with Gray(Spider Lord),Fayne & Zabrielle.  They were held as prisoners by Sentinent who has promised to help them.

Then there was something which Zabrielle was hiding.

Even before Adri could figure this out, she gets kidnapped.

Captain Brahms - Leader of the Sentinent

Farzaaya - Demon title given on one’s deeds. One could not pick one’s own Farzaaya. 100’s of them. Adri asks for a chalk to summon someone. Why did he insist on using the chalk and who did he summon?

While they go searching for Zabrielle, they heard of someone from a forbidden place who could help them out with some crucial information. Hence, they visit Moonless Dilhi where Martial law was imposed by The Faces.

It is from here; the story takes a lot of twists and turns which would keep you captivated until the end. There is no dearth for unexpected events. The flow was picture perfect. Like I said in the very beginning, the story gives you the feel of old and the new ideas comprising The Serpent, The Dragon, The Tantric, The Horseman, The Blade Saint, The Demigod, The Dark Master coupled with Hammer of Numen and the Paladins of Light.

I am also doubly sure that this story could make it to small/big screen if it finds the right person who is willing to produce and direct and would be no less than the movie/serial, I have mentioned in the beginning.

India’s answer to J.R.R.Tolkien is here……

This book is available on Amazon as eBook and Paperback formats.