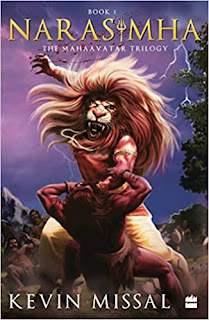 We all would have heard/read about the story of Prahalad, when we were a kid. There were movies made in various languages as well. Yes, we do know the story but what this book conveys is the same story in a different and fresh approach. Yes, an approach which would make it even more realistic to the present day. As we get to see lot of advancement in our day to day life, it is imperative for us to get accustomed to it and rewrite some of our long standing legends and myths in such a way, that it appeals to the younger generation. Kevin did just that and he did it really well.

If you have read his previous "Kalki" series, you by now would have read this book as well as Book 2 - "Hiranyakashyap". He has clearly mentioned in the very beginning that it is not the accurate tale of Lord Narasimha but has interpreted it in his own style which makes it an interesting read.

Anghrad is the brother of Prahalad but is not as good(read it as soft-hearted) as him. Andhaka is their cousin. Hiranyakashyap, the deadliest king appoints Prahalad as an interim king since he had other unfinished business. They were assisted by Kalakeyas and Poulamos. They were in the quest of acquiring Soma drink from the Devas headed by Lord Indira. The other major target was to get hold of Pashupatastra.

Narasimha, the lead character or the protagonist was too tired to fight the war. He is supported during the times of war by Nagas and Simhas. Narasimha during one of the fierce battle kills Andhaka. However, he comes back ALIVE later. How did he do that?

Also, he wanted to fight the battle for himself and NOT for his uncle? He was least bothered about Pashupatastra. What was his aim/target? He was hell bent against eliminating Lord Bhairav. Why?

Hiranyapur , Kashyapuri, Sonitpur - Places you would find in the story.

Some other characters in the novel:

Dhriti - red haired girl. Was she a part of Vishnusena?

Holika - mother like figure for Simhika who was in love with Viparichit (Prahlad’s Royal Guard).

This novel will keep you captivated from the beginning till the end. If you haven't read Kevin's earlier books, you must read this so that you would understand that his stories are worth the hype.

This book is available on Amazon and all other leading stores, online and offline.