1
Welcome to Sarath Babu's Lifestyle Blog Book Reviews Book Review - QUAKER : It all comes back in the end

Book Review - QUAKER : It all comes back in the end 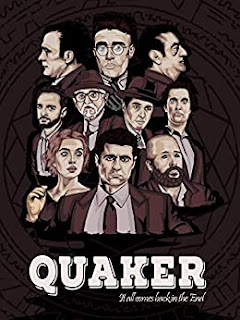 Title - QUAKER : It all comes back in the end
Author - Rohan Singhvi
Genre - Fiction
Publisher -
ASIN - B08JJ8WCDG
QUAKER isn't  about the story which is happening in Asia but in Europe. I was pleasantly surprised to see an Indian author setting up a plot which is happening in Europe - to be more specific, in Italy. The cover picture would give you an idea as to what sort of story this could be. If you guessed it right, there are brownie points for you. Even otherwise, you still win since you read the story and would be knowing the plot.
The story revolves around the following characters namely:
Rick Quaker
Juan Quaker
Sergio Di Maria
Claire McFrigher
Salman Rashiq
Ricardo Perez
Christopher Farrier aka The Phantom
Antonio Corleone
Tommy McFrigher and
Andres Quaker
According to me, this book would go into a classic, if it was made into a movie. I felt like watching the Indian version of "Godfather". This isn't a flattery but you would agree to my view when you finish reading it. The story was told in such a way that you would sit at a stretch to finish it in one go. What happens in the life of Underworld Dons has been captured vividly in this story. Though this is a quick read, I feel this has also contributed majorly towards upholding the speed as you would not witness even a small slump, anywhere.
The fight that happens between the faction as to who will control the cartel and wield enormous power might have been shown/portrayed in various movies but this story gives a different dimension./approach to it.
The story gives the mix of various elements including mixed feelings coupled with vengeance and treachery which might be prevailing cartels. At one place, there is this saying "there is no going back" which is pretty apt. The fight that happens between Italian Mafia and Phantom Reich is a spine chilling one. The struggles faced by them among their own men and also with the cops brings down their activities to a considerable level which is where one faction decides to join hands with Sicilian Mafia on the Marluth Oil Refinery.
Read the story if you love the genres of Crime/Thrill fiction since this would satisfy your desire.
This book is available on Amazon in eBook and Paperback format.