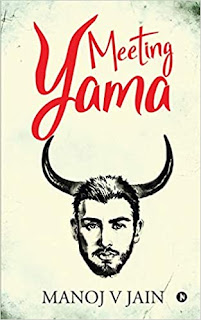 Title - Meeting Yama
Author - Manoj V Jain
Genre - Fiction
Publisher - Notion Press
ISBN - 978-1-63633-548-3
A title like this would certainly grab the attention of the readers. I was no exception. I got intrigued by it and picked up a copy for myself. What is this book all about?
This is a fictional story with the mix of legends and myths that would make you retrospect about your understanding about Life and most importantly, the Death. The cover page was really apt for the title. I have read some of the previous works of the author and was sure that even this book would be completely different just like his previous ones. I was correct.
Initially, I thought it would be a suspense/crime thriller. I was proved wrong. The flow of the write up was done in such a way that you would not feel the boredom and you would finish it in one go.
There are three protagonists in this book namely:
Amrit
Surya and
Rajat
Each had their own problems in their life. This varied from death of a close relative, miscarriage of a child, illness. Though they were successful otherwise, these events continued to haunt them that they decided to take a trip to Varanasi.
Why Varanasi?
They also get to meet each other over there and the story continues.
Did they get to learn or got to know the answers for their questions in Varanasi?
There are few things which makes this novel stand out. What are those?
On the first half, it talks about various events that makes our life which includes marital relationship, love, misunderstandings, struggles etc, These were captured in great detail which would make you feel as if you are watching it in real. On the second half, I felt, it is about "Self-Realisation" wherein each and every protagonist who had varied assumptions about the place they visit comes across few events which make them realize the truth behind certain notions which is not only logical but also retrospective.
Read this unputdownable novel to find out more. This story has lot of takeaways and I am sure, you would appreciate the message which author had tried to put across...
This book is available on Amazon