Book Review - MAKING IT BIG : The Inspiring Story of Nepal's First Billionaire in His Own Words 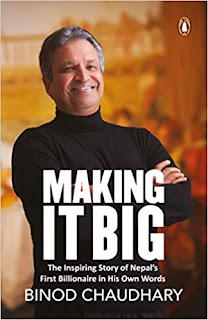 Title -MAKING IT BIG : The Inspiring Story of Nepal's First Billionaire in His Own Words
Author - Binod Chaudhary
Genre - Autobiography
Cover Photography - Kishor Kayastha
Cover Composition - Neeraj Nath
Publisher - Penguin India
ISBN - 978-0-143-42603-5
A real inspiring autobiography which details the life journey of an humble entrepreneur in his own words where he explains candidly as to how he made himself a billionaire. This is a 400 odd page book but trust me, it gives the insights of what a "shrewd" businessman should be. They say "Castles aren't built overnight" and unlike in a movie, where the hero becomes a multi billionaire in just over a song, Binod Chaudhary, the first billionaire from Nepal took few decades to become one and he is going strong by leaps and bounds with no looking back.
The book is divided into 4 parts namely:
1. Birth
2. The Ascent
3. Rebirth and
4. My Business Mantras
The book begins with his horrific experience in Chile where he get caught in a massive earthquake which almost looked like a perfect thriller story, but in this case, was a real one. The book details out the differential kind of treatment, the Marwari communities received in Nepal. He also points out subtly the inner caste differences when author tried to get married to the girl who he loved the most. Though he succeeded in claiming her hand, the trouble he had to go through were cumbersome.
Strangely, I felt a lot of connect with the book. One of them being, my parents never wanted to send me  the boarding school though they used that as a weapon whenever I quarreled with my sibling. On the other hand, author, who had 3 sons sent each of them to the best boarding school in India which has helped them in becoming what they are today looking after the family businesses in Nepal, Singapore and Dubai.
There are lot of takeaways from this book which ranges from managerial to psychological. You would also clearly understand that becoming a tycoon is no easy job and you have to brave the tides along the way as you may tend to get disturbed through various quarters/directions which includes politics.
Also, to become a successful businessman, one has to be good in negotiations and also to grab the right opportunities at the right time apart from diversifying the business which is what he did which saw him transform his garment business to other verticals which includes Automobile, Banking, Beverages, Cigarettes, Discotheque, Food, Hotels, Malls and School among others.
His affinity towards cars and relationship with various world leaders and his spiritual guru apart from taking a plunge in politics were explained in great detail in this book.
What attracted me the most was his transformation of watching "Taj Palace Hotel" in Mumbai to becoming a partner of the Taj Asia and staying in the suite in the same hotel and recollecting the past would go a long way in inspiring today's striving entrepreneurs and young minds to become successful.
Even though this book was released in 2016, I had the opportunity only to grab it 5 years later but I have no regrets since I believe in " It is better late than never".
I am sure you would have heard about the "Wai Wai" noodles. This iconic brand is owned by him.
This book is available on Amazon