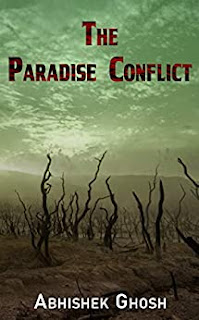 Title - The Paradise Lost
Author - Abhishek Ghosh
Genre - Fiction
Publisher - Novel Nuggets Publishers
ASIN - B08KSHFTCV
The story is set to happen in the Ghost City. Does it ring a bell? If you are attentive or read my mind correct, "Racoon City' should have hit on your mind but don't worry. This isn't the same. The story is set to happen in this city and there were two major factions, who were eventually at loggerheads namely Imperials and Rebels.
As you would have guessed it correct, Imperials were the ruling class and their way of suppression is resisted fiercely by Rebels. There is another faction called Neutral which as per their name remains neural in their stance.
Few major characters in this novel includes Mitra - bounty Hunter of Civil Imperial regime. Son of Krishna, Captain Preston, Captain Kingsley, Admiral Arjun, Stella - w/o Admiral Arjun, Neil and Sheila - kids of Arjun & Stella, Gayatri - the rebel leader, Pramnik, Richa, Shankar, Ahmed, Mary, Toshiro - all of them are rebels, Judy - a close aide of Mitra, Shafiq among others.
While Admiral Arjun always made Mitra to believe that the rebels had killed his father which made him a lethal hunter of rebels, Gayatri, the rebel leader on the other hand had a secret which was concealed by Arjun.
What was the secret that was concealed?
The rebels were actually in search of a utopian place called 'Paradise" since the place where they lived was full of chaos with no water availability. This kind of made me to recollect the movie "Mad Max: Fury Road" but yes, this story is yet again different.
This story is has few twists and turns. Author has done a good job by keeping the flow of the story intact which would keep you captivated till the end. Narrations were done in detail which captures the essence of a place - here it is Paradise.
This story is India's answer to those who love fantasy/fiction with a confluence of action and suspense.
This book is available on Amazon in eBook and Paperback format.