Rage of the Immortals : The CareTakers 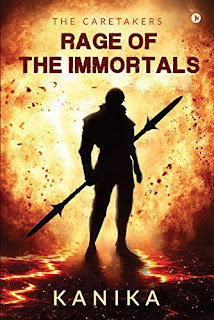 Title - Rage of the Immortals : The CareTakers
Author - Kanika
Genre - Fantasy(Fiction)
Publisher - Notion Press
ASIN - B08NSZ8HZW
An interesting fiction story which took me more than a day to finish reading it. Usually, I read 2 books a day but this story was different. It needed lot of attention in detail and hence I decided to stretch my reading time to grasp the essence of it.
I felt like watching the movie "Underworld" and also the famous OTT serial "Supernatural" since the characters in this fiction made me think that way. Having said that, I must admit that the characters were handled really well by the author.
The story begins with Lt.Sefina aka Kara getting kidnapped. She is taken to the Underworld where she has been deputed as the body guard of Cifer. Cifer had an eminent team which consisted Lily, Bub, Akuma and Asmi. Cifer had a troubled past where he lost his love Ivprith.
On the other hand, there was Atom who controlled Heaven. Then there were other powerful characters namely Moss, Lord Reem, Bawm Bawmson and Dave.
Kara falls in love with Cifer despite she being a Human. In one occasion, she finds the truth about the relationship that is shared between Him and Atom.
What was it?
Cifer gets captured by Moss. Did he escape?
Kara, though human meets Nightmare and gets some training. She also gets "Light" from Cifer. Did all these make her a "Super Woman"?
The story has been handled really well by the author who has explained each and every scene in great detail and what happens in the end is certainly an unexpected one. The title is really apt which you would understand when you finish reading this book.
This book would be a rejoice for the fantasy fiction lovers....
This book is available on Amazon