Book Review - Congress Mukt Bharat : Is the Modi Era the End of Congress? 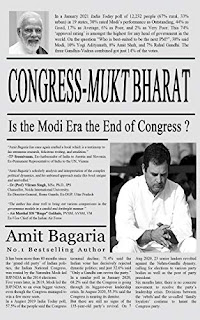 A very well researched book. Amit Bagaria needs no introduction since he has authored 12 books so far out of which 5 of them have become No.1 Bestsellers. He has written ten non fiction books and 2 fiction books since March 2018.

Let me take you through the contents in this book in brief and my review about the same.

The book begins with a bang "Was India for Sale?"

Shows the shocking revelations of the archives from the former KGB Employee,Mitrokhin.

Preface is something you wouldn’t want to miss. It shows the sheer concentration and political acumen of the author who has dissected the information in a picture perfect manner.

The ecosystem shows as to why some corrupt politicians couldn’t be tried or arrested in a crystal clear manner.

A raid by the ED at Karti Chidambaram’s house yielded a discovery of USD 3 billion or little over ₹21,000 crores (at present value) in terms of assets in 14 countries and 21 undeclared foreign accounts? Do you even know ow many zeroes needs to be put up after 21 and how much of employment opportunities this amount could generate in India?

The scams of The Sonia-MMS Era is a perfect refresher of our memory which shows the level of extent of corruption that took place during this period which showed India in the poor light in the global arena. The scams are way too much to read & digest, let alone the enormous amounts of money involved in it...

Author expresses his concern about the non-detection of “Fake Employees Scam” even by the present Govt. under the leadership of Modi.

2019 Lok Sabha Elections:50 Key Takeaways is a brilliant compilation of data which could even be included in the curriculum of those who study political sciences. Why NDA shouldn’t be labelled as “Hindu Party? Read point no.17 to understand the reality.

Through the chapter “Natural Party of Choice” author poses a valid question. What was it?

The book which has 26 chapters, captured in great detail the reality with no exaggeration or taking a side.

The State of Congress shows a detailed study with supportive tables recorded from each state since 1998.

Is it not time to speak about communists who despite of being on a decline from winning as many as 54 seats in 1989 with an improved performance of 59 in 2004 to a paltry 5 LS seats in 2019, what has constituted to this decline? Why do they enjoy prime time debate slots still? There is also an allegation in TN that they took ₹25 crores from the DMK Party to contest in the elections(not the view of the author but by yours truly)

Though the author spoke about the success of Modi 1.0, he also concurrently discussed about the failures in the very next chapter which showed his unbiased approach.

If you’re the one who thinks PM Modi did nothing, read the chapter “How Modi is Defending India” which would perhaps clear your blocked mindset or being misguided by few leftist wing channels which never carried these news till date...

Don’t we not see a much cleaner railway stations and trains these days? “Infra on Viagra” is another interesting chapter which you wouldn’t want to miss.

MODYojanas talks about various pro-poor schemes implemented by the PM.

While some hardcore religious fanatics talks bad about the PM for banning “Triple Talaq”, do you know these?

Do you know what UAPA Act does? How is it special and why should this be welcomed?

Aren’t you happy that J&K is now a part f India and they do not enjoy any special status that was accorded to them? Do you know who benefitted from these all these days?

There is a chapter on New Education Policy(NEP) & about New Farm Laws(those who aren’t aware of these are protesting are advised to study them carefully rather than being misled by your genius friends/local politicians or one-sided television channels/newspapers). Interestingly, Author did mention about Ministry of Fisheries which our genius opposition leader RaGa isn’t even aware of and blabbered during his election campaign in Coastal Tamilnadu.

The chapter “India’s 14 PMs: A Scorecard” is an interesting read. It talks about the success and failures of all these 14PMs subtly.

Is our PM, a dictator(as mentioned by Tukde Tukde gang?). Read a dedicated chapter about this. I’m not naming it here because you yourself could understand while reading it 😅. The question in the end of the chapter is a thought provoking one to the Liberals and Seculars...

Author has always been vocal about allocating the ministries to the respective ministers, whether they made any sense/significance. He has a chapter for this in this book as well. Read it as he dissects it to give his rating. See yourself as to which ministries fare poorly and the reasons behind it which are comprehensive and irrefutable.

Dream Big said Dr APJ Abdul Kalam. In the chapter “If I were the PM”, author has given his preferences in appointing personnel to the respective ministries.