Book Review - The Four Elementals : The Pages Of Destiny 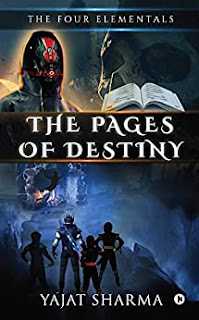 Title - The Four Elementals : The Pages Of Destiny
Author -Yajat Sharma
Genre - Fiction/Fantasy
Publisher - Notion Press
ISBN - 978-1637147047
The Good Kingdom run by the Kings of Necron gets taken over by the evil forces. As the story goes, Scavenger, Archer, Daniel and James sets off to Jupiter. Why?
Pyros could be located in the area called Necron.

The reference of Magic Compartments = Cloud space (similarity - Safe & Secure). The kids along with the Scavenger gets a formidable alliance from the inmates of Jupiter called Greenies. Are they powerful?

The riddles which were found in the entire story were simply stupendous. Shows how deep Yajat could think.

James - intelligent among the kids. He gives some great ideas from time to time. You will understand only when you read the trilogy.

The inclusion of Bermuda Triangle to get sucked into the Dark World is a master stroke by the author. The bookmark in the end of each chapter is a brilliantly thought one. For the second book, it was a skull symbol and for this, it’s the symbol of a book.

The group meets Thomas Arthur Garner, island of the Humans in the Dark World.

Skazen from the White City army offers to help the kids. Cayden gets attacked by the people of Osay and goes into coma. Starlet from Brentinute.

Is either Skazen or Cayden, a traitor?

Then there was a traitor among them. Who was it?

Since the Death Lord and Skull Warrior were banished, who was still challenging the kids and Scavenger?

My only suggestion to the author is to reach out to some Hollywood producer to see if this could be made into a ever hit movie series...