Book Review - The Four Elementals : Quest For The Arcane Crown 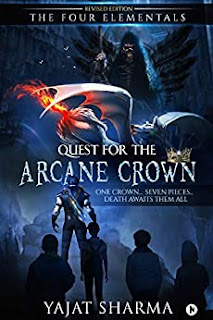 Title - The Four Elementals : Quest For The Arcane Crown
Author - Yajat Sharma
Genre - Fiction/Fantasy
Publisher - Notion Press
ASIN - B08YVVZ6LN
A brilliant trilogy which has surprised me - for its sheer display of imagination in weaving the characters which is not only appealing but would keep you captivated till the end. Considering the age of the author, I am doubly sure that he would go on to become as famous as JRR Tolkien or J K Rowling. The narration was flawless. It is smooth and not even in one place, you would feel the story is lagging for the lack of punch/sequence. To be really frank, I felt like watching a LOTR but in a different approach with different theme.
The story begins with Lord Arcane, who is the creator of Dark World(World inside the Earth) ruling it effortlessly and with perfection. He had innumerable powers which were drawn from the Magical Crown. He foresaw the prophecy of has World being captured by dark forces but the salvation comes in the form of four kids who would be in a position to control the Four Elementals - Air, Earth, Fire and Water.
To avoid his crown falling in the hands of wrong person, he dismantles it into 7 pieces and hides in 7 different places with each of them being guarded by 7 abled warriors who were given a potion of immortal drink. He entrusts in bringing these kids to his devout warrior - Scavenger.
As things would have it, Raven, the son of Lord Mascae(Son of Lord Arcane) mistook his father's death was caused by Scavenger and vows to avenge his loss. He becomes the ultimate evil and called as Death Lord.
Meanwhile, Scavenger finds the 4 kids namely Archer, Daniel, Matt and James.
How and where did he find them?
Were they able to control The Four Elementals?
If they did, how did they suppress the Death Lord and were they able to capture the 7 pieces of the crown?
Since the story is set to happen in different places with various fantasy characters, story moves in a real fast and interesting way.
Though the evil Death Lord seems to have been contained in the end(you have to read the book to find out how), he vows to return back. Rememer, this book is a trilogy and I guess he makes his return. I can't wait to read the 2nd book to find out as to what happens next...
This book is available on Amazon