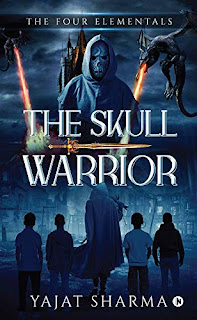 Title - The Four Elementals : The Skull Warrior
Author - Yajat Sharma
Genre - Fiction/Fantasy
Publisher - Notion Press
ISBN - 978-978-1637147047
This is the second book in The Four Elementals trilogy. I finished reading the first book yesterday and I could not start reading the 2nd one which I started it today and completed it. Having said that, I can't wait to complete the 3rd one too.
For those who have read the 1st book would know by now that the Death Lord vowed to return. He summons the much dangerous Skull Warrior using all his powers despite being contained in the 7 pieces of Arcane Crown) who comes to the Dark World and wreaks havoc.
Usually, as and when the sequels are released, the curiosity which the first book/edition has created would tend to die but it is not the case with this second book. In fact, it further triggered the interest in me to start reading the third book as well.
Yajat has even mentioned about Covid-19 in one of the instances in this story which shows his presence of mind.
Scavanger reaches out to 4 kids in their dream seeking their help, yet again, since Skull Warrior had arrived in the Dark World. He has attacked most of the kingdoms and had won it. Those who missed his wrath were fearful and did not wanted to challenge him. He could only be contained with the help of a sword called The Slayer but in order to get that, they have to obtain
The Trident which is protected by the Hothel
The Bolt which is protected by the Hellfire and
The Poison which is protected by the Warhead
These would then be formed as the Slayer which can be wielded only by the Warrior after a Sacrifice.
This crucial information is given by The Lynx, Man of the Rock.

Urrax, a demon volunteers to help them in the beginning but betrays the group. Why?

When things were going in their favor, Lynx gets abducted to Voldmir palace by Grim which had the dubious distinction of no one making it LIVE once taken inside it.

Though they manage to get the things that is required to invoke/assemble the Slayer, the way in which they get them are given in a detailed manner. A real good imagination alone would have made this possible.

Two mighty and helpful warriors die. Who were they? Why did they sacrifice their lives?

Who is the Sacrifice?

The book couldn't get any interesting than this. I must admit that this would be a perfect gift for your kids or if you're visiting your family or friends who has a kid a their home.