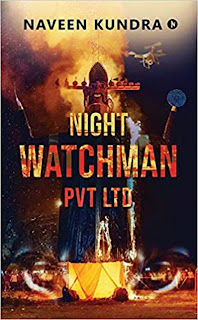 Title - Night Watchman Pvt Ltd
Author - Naveen Kundra
Genre - Fiction
Publisher - Notion Press
ISBN - 978-1-63781-401-7
When I saw this title, I was totally intrigued as it evoked immediate interest in me. The cover page is designed perfectly well to complement the story. This is a story of a maverick who chances upon an idea and invents something. Sanjay Dhingra floats a company called Night Watchman Pvt Ltd, after resigning his VP job from Shyam Tech. He had a troubled married life.
He meets Ruhi who takes his confidence for  ride.
On the other hand, his close confidante, Chandra, who was his ex-colleague from his previous company joins him. He refuses to take salary despite having EMIs to pay. Sanjay finds out that he was conspiring with his ex-boss to bring him down.
Then there is Ahuja, his ex-boss and Kshirsagar, a shady builder who trains their guns against him.
Budhiraja, Deputy Director of forest department, Dhan Nagar who was very supportive in the beginning backtracks.
All were done to get hold of his prized innovation JB.
What is this JB all about?
Who could Sanjay trust?
While a murder case was lurking over his head with Deputy Commissioner Nand Kishore and Inspector Ganpule behind his back, will he able to prove his innocence?
Read this fast paced story which has the combination of love, lust, treachery, arrogance, struggle would make you captivated from the beginning till the end. Loved the book since it had an unusual plot which was handled well by the author making it interesting and keeps you guessing...
This book is available on Amazon