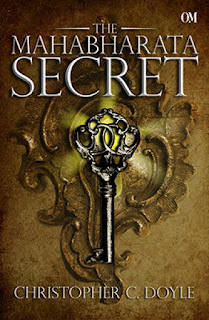 This story is a perfect Hollywood Thriller material. The way the story gets unfold in front of you will make you read from the beginning till the end without giving a second thought.

If you wonder, what this book has got to do with the Mahabharata, you need to read it yourself to find out the answer. There were lots of unexpected twists in the story. There was trust and then there was a betrayal and amidst all the chaos, there was a beautiful love between the two lead characters.

This is the first ever book I had read of Mr Doyle and I must say, I did immediately fell in love with it. Also I am looking forward to read his other two books which I bought it along with this.

As they say, our ancestors were technically superior - there were lots of myths around it. Not all may be true but at the same time, not all of them are lies as well. The usage of celestial weapons and pushpak viman in our epics - Ramayana and Mahabharata has come back to haunt us by being used in an incorrect way in various places, though they were not as good as the ones that were believed to have been used many centuries ago.

All I can say is to believe in our glory but at the same time to try and protect the age old secrets because as a nation, we never had the history of invading any one but being invaded and this should not pave way to the dark forces to catch hold of our real secrets which would keep us in peril.