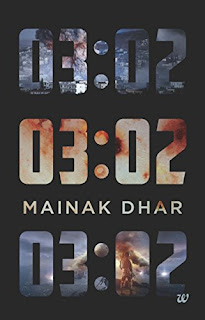 How patriotic are you? How well do you treat your fellow Indians? What if the country has come to a still just like in the movie The Day The Earth Stood Still? When your country is under attack, would you come together to fight the unknown enemy?

Your answer to all the above questions is 03:02 by

A perfect novel with a nail biting sequence of events which makes it a perfect film stuff of none less than a Hollywood movie. To be real honest, I had goosebumps in various places which showcased the sheer grit, courage and planning by the main character Aadhi ably assisted by others.

Aadhi worked in a Fund Management Company and gets promoted as Vice President. He comes back to his apartment in Mumbai and was dreaming about treating himself with a Mercedes C-Class when the incident happens. The power goes off. The time was 03:02

Aadhi thought it would get over soon but when he realised that it wasn't the case, fear grips him. None of the automobiles or electronic devices worked. He immediately plunges into action. As he lived in a society, he had stiff resistance in the beginning from various members who would never ant to step out of their comfort zone but when they also realised that something was a real amiss, they joined him to support him. The list includes Pandey, General Lamba, Sinha - an MLA, Dr Guenther, Kundu, Mahadev - an Auto Driver, Akif , Ismail, Nitish, Megha - a nurse, Yash, Prashant, Kundu, Mrs Khatri,Anu, Nitish, Mohit, Sood and others.

You might wonder what so many characters were doing in a story but believe me, each and every character had a perfect role to play. You would feel the real shock of what all may happen when there is no one to control the law and order. Loots, ransacking, murder, rapes would be imminent and all that you need at any given point of time is HOPE. The story also sends a strong signal as to not to fully rely on technology but on alternate conventional sources as well which may come handy during the emergency.

Effective use of available resources comes into the picture and there is also inventory management that has been well explained in this beautiful story. This story is not about specific set of people doing super heroic act but all coming together to do what they could, in their own way.

After reading this story, I could very well connect with what exactly is happening in the war torn nations like Afghanistan, Syria, Iraq to name a few which needs to be addressed sooner or later...

The message is clear - NO RELIGION ASKS TO FIGHT OR KILL PEOPLE!!!

Well, what happened to Mumbai and why this chaos? This is something you should find out by buying the book yourself.

My COMMENT/RATING - Arguably he best story I have ever read in the recent times :-)