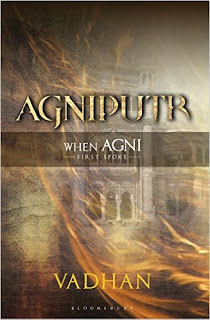 This book is a sheer genius and would perfectly fit the bill of being made into a movie either in Bollywood/Tollywood or Kollywood and would sure to become a super hit.

I was fascinated by this marvellous story for the fact that I read all the 350 odd pages in one go.

The book consists of 4 fragments.

The story begins with Satyanarayanan Raghava Kasavari aka SRK who works in CSIR on paranormal activities and was about to get married to Sri Sailaja aka S2. He find something suspicious in Gudem Village and sets on to find more information about that activity where he gets killed.

Having found out about his disappearance Sheila Pitambhar, the boss of SRK in CSIR who los her husband and her parents gets into action. She meets the Defence Minister and gets his nod to study the area with the help of satellites and few equipment. She finds there was smething extra ordinary about the place which wielded so much power that none of the known technology could ever produce.

Raghuram Surya, the surviving member of the cursed Surya clan gets notice from The Ministry to part his property for easibility to study the prospects of setting up a Geo Thermal Plant. When he resists, he gets threats from the Home Minister Kiromal. On the other hand Sheila meets Pichi Rathaya who asks her to get Raghu to come along with her where he would reveal the secrte that he has kept for more than a decade about Raghuram's father.

By the time Sheila convince Raghu, Pichi Rathaya was no more and uttered a syllable which may be crucial to breaking the myth but neither of them were sure about it.

When Sheila along with Raghu, Priyanka and few others tried to enter the hall, they get attacked by a Sable Parch and few gets killed and Priyanka was reduced to vegetable state, Meanwhile Kiromal hires a goon to kill Raghuram. There were few more interesting characters and I would like to give a special mention to P.Eshwar

Did Raghu manage to find the syllable?
Raghu was advised to meet a temple priest but learns he became a Governor of a State and retired. What made the priest to reach such heights?
What is the Sable Parch?
Who is P.Eshwar?
Did the Agniputr rise?
What is Sutram and was it stopped?

All these are important questions that you would get to know the answer by buying this nail biting fiction thriller book. The book is available on Amazon