The Allegorical Expedition - A quest for Truth 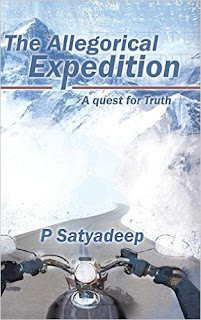 A story that not only made the main character Satyajit realise himself but also me,a mere reader and I am sure that it would make anyone deeply connect to our Vedas and Epics that were written many centuries ago.

Satyajit was a famous movie director who gave back to back hits and was much sought after in the bollywood industry but somewhere, he was missing something in his life. This probably attributes to 2 questions that was put forth by his father when he was a kid.

What do you fear?
What is your goal in life?

Even though he had name,fame and money, nothing could give him that sense of satisfaction as he thought he was living a false life. He eventually had a fall out with his childhood friend Maaya who had been his backbone in all his ventures. Later he realised that he did commit a mistake.

Maaya did forgive him and in the meanwhile Satyajit or SJ as he is fondly referred came out with a new script and he wanted to find out the reality rather than making the movie as it is penned down by the author.

He goes in search of the truth and he ends up meeting Shantilata, a spiritual healer who in turn refers him to Pandit Shukshmachari. He goes on an expedition covering various places en-route meeting the Panditji.

What did he discover during this expedition? Did he meet Panditji? If yes, was his questions answered? This is the story all about and I would suggest you to give a careful reading from Chapters 14 till 28 as it needs detailed attention which will make you say WOW, for sure....