Colgate Magical Stories - as told by my niece

When I got the New Colgate Packs which had the Space theme, I knew for sure that it would invoke interest on my little niece - Varshaa D who is in her 4th Class.  As soon as she saw the packs, she started cutting down the pictures making it a perfect set - as mentioned in the pack.

Since I got 3 packs in total, she got ready and started telling her version of stories almost instantly. 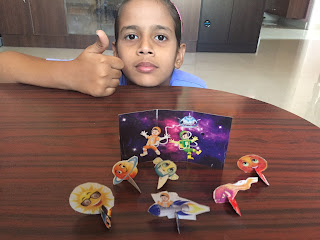 Rakesh and Sunitha were twins who always excelled in their studies and sports. They were appreciated by their teachers for their enthusiasm and interest in various fields but they always got fascinated by space and the galaxy most of which is unexplored.

One evening, it was raining heavily and they slept early. All of a sudden both of them saw themselves floating in the space with a peculiar dress which they later realised it as a space suite. They were overwhelmed as they got to see Comets, Saturn, Mars and few other planets in close quarters. Suddenly they woke up realising it was just a dream. Though they were saddened that it was not a reality, they vowed to make their "Dream Come True". 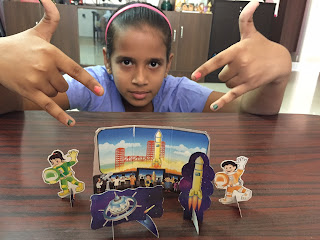 Rakesh and Sunitha studied real hard. They chose Science as their main course and joined one of the premier institutes where they ended up completing their Bachelors and Masters degree in Rocket and Space Science.

Having achieved half of what they had aspired for, they immediately got placed in ISRO. By then ISRO had already set up few World Records by launching few hundreds of satellites in one go and they also had developed cryogenic engines which now had the capacity of transporting back humans from the space but were just lagging behind the technology of finding the possibilities of launching the rocket/satellite from the planets where they were stationed.

Rakesh and Sunitha spent all their time in trying to invent this technique and finally they managed to succeed as well. The Prime Minister of India was elated to hear about this milestone invention and invited the twins to his official residence. He saw them sporting a sad look on their face and came to know that they were not allowed to board the rocket as they were meant to be in the Research Station(Base) to assist others but their dream was to go to these planets themselves. He immediately ordered the higher officials in ISRO to allow the genius twins to board the rockets. Rakesh and Sunitha were speechless. 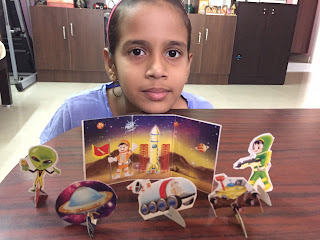 The D-Day came and both Rakesh and Sunitha were set on their mission of their lifetime. They landed in Mars after exploring Moon. Rakesh went ahead and placed the flag on the planet to establish he was the first human to reach there and suddenly he was horrified. There was an alien at a distance and it was glaring at Rakesh. He was not sure as to what he needed to do as he was without any arms. Just then a shout came from behind. It was Sunitha who had a tranquilliser on her hands. She immediately shot the alien. Even before the creature could recognise what was happening, it was attacked and fell on the ground.

Rakesh and Sunitha hurried back to their pod and left the planet. Only when they came out of the dangerous planet, they realised that they did not click a pic or rather a selfie with the alien. They however gave a message to themselves and to all others later, when they arrived back to Earth "Safety First"

I hope you all have liked the story which my little niece Varshaa has managed to conceive and said it with great enthusiasm. Hit a Like or Comment, if you want to hear more such stories in the future.

I am blogging my #ColgateMagicalstories at BlogAdda in association with Colgate.