Love Has Its Various Ways 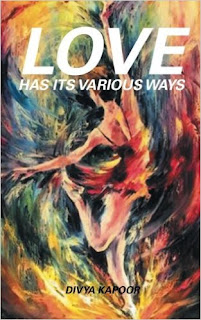 This isn't another Self-Help book which you would have assumed or read but the one that helps you realise your inner self.  The book does not offer you any saintly discourse as it was authored by a person who leads a normal life. There is no hard and fast rules mentioned in the book but of course there is a workbook in the end which would help you realise your dreams by invoking your inner potential that would act as a driving force, if followed diligently.

After reading the book, I felt light on my mind. I would say this is the success of the book because it does not preach you rocket science but makes you understand the nuances of life in a simplified way which made me wonder as to how a normal person can author such a book.

I too assumed that this book may be something related to romance after seeing the title but I must say I was deceived. Yes. It talks about the Universal Phenomenon in a subtle way - LOVE. This forms the basis of almost everything which is quintessential in determining your life path and the success associated with it.

I would be giving some excerpts from the book and would leave the rest to the readers because only if you read and feel it, you would be in a better position to implement it.

What I liked the most about the book were the usage of short stories and sayings from influential persons in an effective and appropriate way.

Chapter 1 - GOD - This chapter talks about a powerful subject called LOVE which is none other than GOD and if you are a fan of Kamal Hassan, you would have watched his movie "Anbe Sivam" where he talks about the same.

Chapter 2 - Letting Go - Life is not about happening but reflecting. Remember, if you are alive, you have a purpose.

Chapter 3 - Miracles Happens - Just because you do not see or witness, it does not mean miracles aren't there. They do happen only to those who believe. The magnitude differs from person to person.

Chapter 4 - Oneness - Live the life to the fullest. We do have just one life and we may not be certainly sure about our next birth. When you allow the negative emotions to leave your body, you feel real light.

Chapter 5 - Whining - Phenomenon of Giving & Receiving. This is advocated by Top 2 richest people in the world - Bill Gates and Warren Buffet through their "Giving Pledge" foundation which has also seen the support from the likes of Azim Premji from India. Do not invest all your energy in one negative aspect as you invariably help in magnifying it.

Chapter 6 - Importance of being awake - If you are getting up in the middle of the night, do not fell bad about it. It is this time which will make you come out with some extra ordinary thoughts and I can cite my very own example of having penned down close to 100 poems between 2001-04 when I was working in the night shift. Unfortunately it was grabbed by one of my manager who never had the courtesy to return it till date. Those were my best creations till date....

Chapter 7 - Forgive to enlarge future - Always forgive your enemies. Nothing annoys them much. How true is the statement. If you have exercised this in your real life, you would certainly agree to the above mentioned claim.

Chapter 8 - The winner takes risks - We have seen this in many cases with the recent example being Mr Donald Trump who had won the US President Elections.  The quote "When you do what you fear the most, you can do anything" is a perfect testimony to many success stories.

Chapter 9 - Missing on focus - In life, we win some and learn some. We never lose but rather we learn what not to do.

Chapter 10 - Focus on what you want - Follow the 4 steps mentioned in this chapter for effective results.

Chapter 11 - Don't chase anything or anyone - I liked this quote " If one dream dies, dream another dream". How true is that. By stopping to dream, we are not achieving anything rather we would lose the spark to achieve something.

There are more in this book. I would say this is a treasure trove. Embrace it with an open mind and I am sure there is nothing which could stop you from becoming the person you wanted to be...