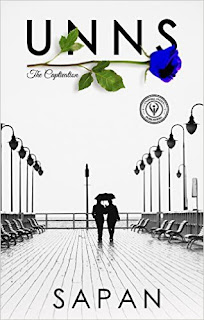 What is UNNS? I had been wondering as to why this title for the book until I read it in full and realised that nothing could have fit better than this title. This is a story that would unfold various emotions like love, break up, betrayal, disappointment to name a few. Sapan has done a splendid job in weaving the story to near perfection.

Initially the story begins with a love affair between Atharva Rathod and Meher Qasim in an unexpected way. Meher leaves to Germany without letting Atharva know as her parents did not approve of her love. Things take a different turn when Atharva stumbles upon Meher after 12 years in Germany. He faces a betrayal over there from Meher.

Why did Atharva go to Germany?
What did Meher do?

After few more years, Atharva goes to US and destiny has it the way that Meher comes to his place.

Was Meher stalking Atharva? If yes, for what reason?
Did she understand his true love for her?

The story is full of twists and turns that would never fail to surprise you. A perfect read from the beginning till the end with the speed picking up literally after few chapters which gets maintained till the end. A story with a difference is what I can say :-)