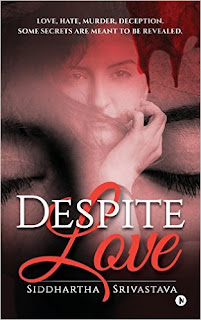 This story by the first time novelist Siddhartha Srivastava who is in his 12th Standard has impressed me a lot and I am sure it will impress the readers too.

I will not reveal the plot of the story. What I can say is this " One of the best stories I have read in recent times with related events coupled with incidents which serves as a backbone for the successof the story".

It is over here, things starts going awry. Each one gets killed one by one and the way this was narrated in the story made me feel that I am watching the famous sequel "Scream" though the plot of this story is entirely different.

Why would they get killed?
Did the protagonist Rishabh survive?

The ending was a real good one though I could guess the killer after a while but it got confirmed only in the last chapter. The story is about Love, Hate, Murder and Deception as was rightly mentioned on the cover page coupled with lust and greediness.

Read the story today to find out who the killer was and the motive of the killer.