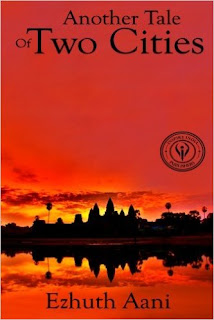 The story is an exceptional novel that was woven based on few historical facts coupled with some amazing imagination from the author. Though author wants himself to be excused in case of giving an incorrect info on Buddhism, to my knowledge, I do not feel that is the case.

The story is set on the past which is supposed to be happening in Cambodia where two princes Adithya and Mahendra goes on a journey to find better prospects and coalition for their country. While Adithya goes to Srilanka and and meet the King and The Emperor and could also manage to get their promise of being helped at the time of need/requirement, Mahendra goes to and learns the technical knowhow of few aspects.

While Vajragnani is the Guru and was revered, he had a beautiful daughter called Mandagini. Adithya and Mandagini loves each other but when Adithya sets on a journey, he meets up with another dazzling beauty called Visaka. Though his mind was still attracted towards Mandagini, his heart wanted Visaka but he learns about some truth after which he repents for having looked at Visaka with lust.

Mahendra on the other hand was forced to do something against his will and wish. He returns to after escaping from and makes his country real strong. Adithya reaches after 2 years. Most of them by then assumed he was dead. He faces couple of truths which literally shatters his world.

Read this historical fiction which would not only make you to enjoy the story but also will empower you with lot of information on Buddhism.

Author has woven a story with great precision and I was surprised to hear that this was first published in Tamil and I really cannot imagine as to how the story would have sounded in the native language which surely would have been a hit. The story was given with detailed elaboration of history coupled with the events and would serve as a dual benefit of satisfying one's taste of reading a great novel along with treasure trove information about Buddhism and the culture of South East Asian Nations making it a perfect read for those who loves History.