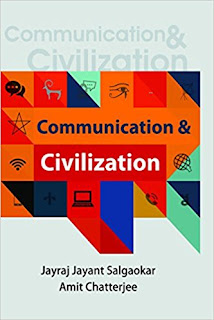 A classic is here. The book talk in great detail about how communication has begun and evolved which in turn helped the Civilisation. Human, as we now used signs and symbols before the alphabets were introduced.

Similarly from recording the writing in rock edicts as scriptures, the development saw the writings in palm leaves until it was replaced by papyrus which led to the introduction of paper.

Communication is a process that keeps evolving and if we look at how it has grown and people who has contributed to it, you will be astounded. The book as mentioned above has captured all the major aspects and presented the facts supported by pictures in a crisp format.

The book has a good essence of history in it as it takes us back to Bolshevik, Industrial and American Revolution and at the same time, it also makes us understand as t how communication played a vital part in bringing people together be it for the good cause or otherwise. Eventually, it is the good cause which prevailed over a longer period of time.

You would not only get to know about the ways and means but also the modes that has assisted in the growth of communication be it printer, copier machine, personal computers, telephone, telegraph to name a few. Though we keep upgrading from one technology to the other (the latest being the demise of telegraph in Indian Post Offices as it is no more viable cost wise), people who contributed to it becomes a long forgotten one unless he/she has made a greater contribution.

To sum it up, this book is a treasure trove which would give you the essence of the broader terms "Communication and Civilization" in a concentrated form which is easy to grasp and store it in our memory.

Additional pointers to be noted:

The book is a product of 5 years of research and is made with a purpose to serve as a textbook for students of communication.

The book has already been endorsed by Govt institutions like Mumbai University and Raja Ram Mohan Roy Library which distributes the book to all relevant universities across India.

Ministry of External Affairs will also be procuring it and send it out of India as well.

Global Indian International School has already placed and order for its students.

The book is expected to be launched by Governor of Maharashtra soon.