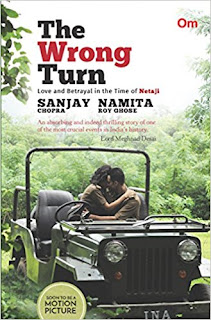 Did you ever get a chance to know what probably would have happened during the pre-independence era? You might have watched some war documentary but nothing would come closer to this. Though this book is a fiction, it still makes you feel that you were very much present in the battle field yourself.

The 488 page story is a perfect novel for enthusiasts who would appreciate its quality over the length of the story. It covers lot of aspects - majorly about Indian Independence and Freedom Struggle carried out by eminent coupled with love and is a perfect movie material and no wonder this story is being made into a motion picture.

The story begins with the introduction of Debraj Mookerji who was born in a healthy family and his Dad was Knighted by the British Empire. Things did not go well despite their riches since his mother was lavish in her spending hosting parties which makes Sir Harry run into debts and his sprawling estate gets taken over by his close confidante Gangadhar Goopta aka G.G. who became rich due to the initial support from Sir Harry.

Deb's only sis Debi gets pregnant with one of Deb's friend Andrew who did not approve of becoming the father since he was a racist and he eventually gets killed. It is then Deb meets up Nishonko in an unusual situation where the cops starts chasing them. Deb gets saved by Nishonko and he joins him to be taken to the camp of INA headed by Netaji.

You read it right.

The story has a good fictional involvement of the great freedom fighter Netaji himself and as a reader, I wished some of the incidents mentioned in the book should have come true to see our Nation in a different situation altogether.

While we know about the outcome of the war, this story makes you feel intrigued to find out as to what happens next. Netaji had some close confidantes like Kabootar, Gaffar, Nawaz etc and one of his trusted aide turns out against him.

What happens in the end?

The story is nothing less of a suspense thriller which would make you keep guessing from the beginning till the end making it an interesting read.

I have got this book for free from Readers Cosmos as a part of Book Review Program. You may also get yours by enrolling with them. Click -> http://thereaderscosmos.blogspot.in/