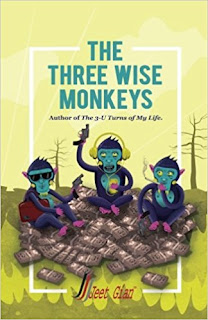 Where and how do I start about this book? I haven't read a book which is as hilarious and as sarcastic as this book.Full credits to the author. I initially felt bit bored but as soon as the introduction of Pawar brothers, things took a different turn and I was reading the book with my body position turned upside down.

I am trying to write this review in line with the author, The story is about three clueless CA's - Chartered Accountants (not anything else) who clears after so many attempts and were still struggling to make money through their profession. One should appreciate that they remained dumb and honest despite becoming a CA who usually makes all the twists and turns in the account - may be they were not tuned to do that.Who knows?

They accidentally stumble upon the Pawar brothers who owned Kohinoor and Shalimar Group - again, these names does not resemble any existing brand as the author asserts all the names and characters mentioned in the story is unreal and fictitious. How on earth will he find a name being named from Venus where Indian Govt is trying to send their manless shuttle which will go either go closer or probably land if it survived or we lived, whichever is earlier or later.

They had the bad habit of buying awards and shot to fame though they were filthily rich. There was a mention of VDIS but there was no mention of Demonetisation of Rs.500 and Rs.1,000 Currency noted because the story idea and concept was conceived much before that :-) So DO NOT blame the author.

They tried to form some company somewhere and managed to do it as well which unfortunately falls under the scanner of I.T. officials ( you would not see them until your money is revealed or exposed. Its like they were dormant and all of a sudden become an active volcano in Japan). How the trio - sorry, I failed to name them earlier - The Protagonists - Amar, Akbar and Antony (again not from the movie) managed to escape unscathed.

I can very well say that the book promises complete fun and laughter. It is better to read it without any high expectations and with the open mind and keep some medicines, if you start rolling on the floor laughing and get hurt......