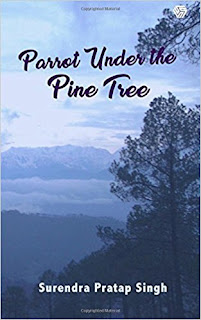 A brilliant tale which you would appreciate once you finish reading it and most importantly, this story would leave a lasting effect on you. Why I say so?

The story revolves around two major characters - Vedanta and Saranga aka Ved and Sara. They both comes from a different background and Ved meets Sara in Kausani and falls in love with her. In fact he was told about this prior by a banker tuned Sadhu. He also tell Ved about meeting up with Maya and also about the turbulence he would face in his love life.

Ved was a practical guy but Sara was different altogether. They eventually fall in love with each other and get married. They get to face the turbulence after Ved commits a blunder and openly admits it to Sara. Did they continue to lead a happy life there after is the story.

As mentioned earlier, Ved does meets Maya. Who was she?

Sara also gets some useful advice from a German lady called Gomati. How did she get the Indian name in the first place?

All these were beautifully scripted in this romantic novel with such a finesse that you wouldn't help but fall in love with it. Most importantly, I loved the way, author has narrated the mesmerising Kausani which would make the readers feel that they were there in person.