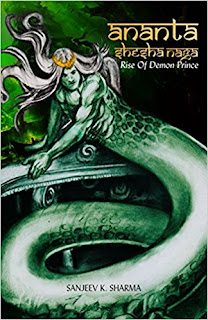 
To begin with, I must say that I was completely impressed with the story. I have read hundreds and thousands of stories but this one is unique from all that I have read. This is story about Naagins. Initially I was sceptical as to how would author make it an interesting read and since it was predominantly about Nagas(snakes), I did not get attracted to it but as and when the story started to unfold, I was dumbstruck. I did not realise when I finished the book that the story had 280 pages and I never felt fatigued reading such a big one.

There was a quarrel that existed between Demon Sarpas who considered Asuras controlled by Varuna and Devas who was headed by Indra were their main enemies. Though they were from Sarpa family, they also considered Anata Sesha Naga - the Supreme King of all Nagas as their enemy too. The Sarpa Mata Vansa wanted to avenge for which she prepares a Golden Sarpini Swarna as a lethal weapon.

In order to become powerful, she has to deceive five out of eight brothers of Ananta Sesha Naga. She gets able assistance from Mahooka, a slave. These brothers who she set to trap to get her ultimatum done were Takshaka, Eyrawata, Shankhapala,Mahaneel and Nahusha. She manages to deceive all of them.

She creates a demon creature who had the blood of all five sarpa rulers along with the blood of underworld demons. He was named Karushetu. He was immensely powerful and manages to defeat Varuna easily. He was all set to defeat Indra when an unexpected help comes.

The story is nothing less of a thriller ride which would make you guessing as to what will happen in the end. I was delighted that in the end, author has given an hint for the next part. I am sure it would be a major hit as well, once it hits the stands....

Nicely reviewed Sarath Sir... an insight of the tale has been effectively and impressively portrayed by him..