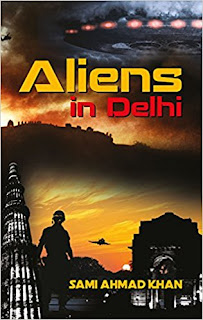 If you are a Sci-Fi lover, I am sure that you would love this novel. When I was reading it, I could relate this book to few Hollywood movies like Species, Independence Day, Men In Black(MIB) and Aliens to name a few which means, this book is not based on any one of the above but has some resemblance from all the movies combined which makes this story, unique.

You would be entertained from the beginning till the end since the story has some unexpected twists which would take the readers by surprise. What I liked the most was portraying one of the dreaded terrorists which the world has ever seen, as an Alien.

The story can be said in a single line but having said that, it is really difficult to elaborate it to such an extent keeping that one line as a base. Interestingly, at least to me, I found that there is no protagonist who can be singled out but yes, in the end, there emerges one but I wouldn't say he or she is the sole one.

The mission is simple - to save mankind but when the events starts unfolding in India, I felt glad for the fact that this did not happen in the usual location - United States. A different approach to the subject is what makes this novel, a real interesting one.