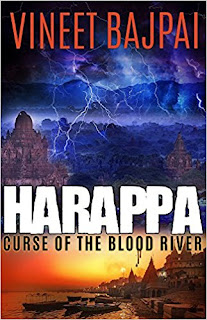 Title - Harappa - Curse of the Blood River
Author - Vineet Bajpai
Genre - Fiction
Publisher - Vinnet Bajpai
ISBN - 978-93-5268-548-6
A gripping novel from the beginning till the end! Well, I wouldn't say it is an end because the novel does not end with this book as it continues in the next part as Pralay - The Great Deluge.

A perfect combination of the past and the present, where the story goes all the way back to Harappan Civilisation and comes to the present one. Author has also asserted that he has used some of the historic references to make the story interesting and it is a pure fiction. He has also mentioned that he respects all the religion, though the novel has touched upon few others in the story.

What happens when a person who is a Half Human and Half God when he tries to stop something inevitable? Well, this is what the actual story line is but the secret does not end here. It is much bigger, wherein the characters were used very intricately by the author. This is the story of sudden disappearance of the mighty Harappan Civilisation against the popular “Aryan invasion” theory.

Vivasvan Pujari was the Demi-God(I can say that he is the Indian version of Thor)who took care of the wellness of all the beings in Harappa. However his brother-in-law Chadradhar's wife Priyamvada gets poisoned by some dark forces.

Who are these dark forces?
Is it a single entity or multiple person?
What was their motto?
How did the mighty empire fall?

After centuries the greatest grandson of Shastri lineage Vidyut is summoned suddenly to Varanasi where a dark family secrets awaits him? What is this secret? An assassin is sent to eliminate Vidyut? Why? There are leayers of secrets buried in the sands of times and multiple relationships formed, tested and broken.

I must admit that the story is a great plot wherein you will not feel bored right from the beginning till the end since author has penned it so meticulously without deviating even a little. I am now eagerly waiting for the second part to be released. I am sure, when you finished reading it, you would also be expecting the release of the next version. If you didn't, then I must say that you haven't got the plot for sure ;-).

"This Book Review/Interview is a part of The Readers Cosmos Book Review Program and Book Promotions" to know more log on to http://thereaderscosmos.blogspot.in/."