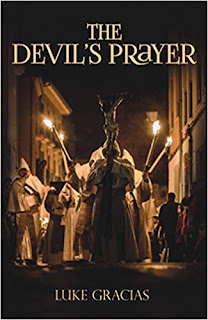 A very well researched book that involved various churches from historical periods dating back to the early 1st Century till date as to what was the most well kept secret including the tomb of Genghis Khan and how he rose exponentially which is also combined with various other factors like the invasions of Greek and Roman Kings and most importantly the existence of The Devil's Prayer or Devil's Bible which spoke about the birth of the evil which would lead to Armageddon.

The story begins with a nun committing suicide in Spain. While she hailed from one of the most revered church surrounded by great priests, none could able to stop her end since she embraced it as promised to the Devil. Is this devil so powerful and if yes, who was he?

On the other side of the world, in Australia, Denise Russo finds out that the nun who plunged to death which wouldn't be the case otherwise in normal day order was none other than her mother Siobhan Russo who disappeared mysteriously few years back.

What made her to leave Australia?

Denise undertakes a journey only to be attempted to be stopped by some unidentified men but she gets saved by Father Jakub and eventually Siobhan lays her hand on the book "The Confessions" which reveals the dark past of her Mother. What was it? Did that lea to her suicide?

There are so many gripping situations including torture, backstabbing, love, treason along with horror which has been very well clubbed in this story. I felt like I was watching the movies of  The Omen, Excorcist and few other fictional movies all at once.

Luke has made this book a very compelling one to read. I must say that I felt bored in the very beginning but once I cleared past some 50 pages, there was no turning pack since the story line was so well blended with the characters that has forced me to read all at once...