Book Review - The Quest of the Sparrows 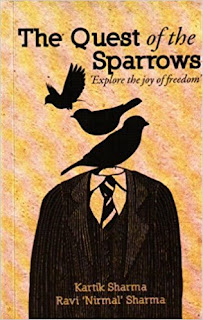 A story which would make you dig deep into yourselves to realise your real potential. The book is divided into 4 parts. In part 1, person who was wealthy but still was not contended with it, comes and joins Swami Parthiban. Part 2 is where a detective comes. Part 3 is a about Swami Parthiban himself and Part 4 is an unexpected one.

What makes this book special?

It made me cry in few places. They have such a deep meaning but was penned effortlessly by the authors. The events that were explained would make you feel that it did happen in real. There is no discrimination shown by the authors towards any religion which is one of the plus and secondly, the book would make the readers realise the truth behind the so called Divine Power without having to seek it all the time.

The plot is a very interesting one. There is a map given in the beginning of the novel and I wondered or what this was furnished and then realised when I started reading the novel. The story revolves around humanity and how the people in rural India are still humane enough and treat the tourists as their Athithi. There were few lines which had struck the chord and I would like to quote one or two. There was an instance where a worker goes beyond his limits to help Swami Parthiban and his disciples and when asked as to how he would face his master, he utters "Even if my master scolds me, it'll be one person suffering instead of so many", "We don't eat before we serve our guests", "You treat your cattle better than I treated my parents","I have seen only preaching babas but today I saw a karmayogi baba","Sharing pains and problems unites people" to name a few.

I am sure you would also find the above equally appealing along with other lines that runs across the entire book. A simple story that was given with right proportion of knowledge and virtues and if used in the right sense, can bring wonders in your life.