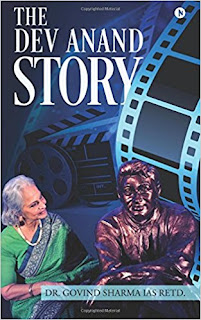 The book is a recollection of some of the greatest memories, the Evergreen Actor, as he is known is associated with. The intricate details of each and every movie has been very nicely covered by the other even though the book claims this isn't an exhaustive list.

This can certainly be fit to be called one of the best collection of information in one place about Dev Anand. If you are a fan of him, this is something you cannot afford to miss.

The book talks in great detail about the life of Dev Anand as to how he found the break to be featured in a movie and his association with some of the great names in the industry which included greatest musicians, directors, producers and co-actors and his temperament and approach.

I would say this is certainly an unbiased book because while it celebrates the success of the star, it also details about his failures and the reason behind it. Since the information is really abundant, it is advisable to use the marker to make a note of some of the important information since it is only by that way, one could do justice to the Padma Bhushan and Dada Saheb Phalke Award winner.

This can certainly be classified as a Treasure Trove!!!