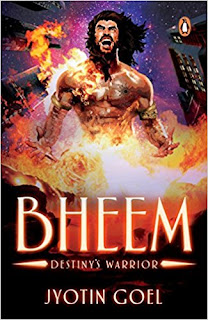 A novel that would give you the feel of reading the story which includes the characters of "Thor" and "Hulk" with a little bit of other characters which we have seen in super hero movies. Having said that, this novel is about our own mythical super hero BHEEM

While the prologue takes us back to the period of Ravana, the death of his sister Surpanaga unleashes a new curse which would put the mankind to the peril after few centuries. This takes into effect through time travel where the characters Bheem and Asvattama who comes later - during Mahabharata becomes the part of the legacy where as we know Bheem stood on the side of justice along with his other 4 others - Pandavas who fought against their cousin brothers - Kauravas. We also know that in the end the sons of Bheem gets killed by Asvattama who was considered immoral due to the jewel on his face which gets removed by Lord Krishna.

However, the story did not end there. These two characters survived the time and tide to be teleported to the present world where Asvattama who was affected by the curse of Surpanaga is trying his best to unleash terror on mankind. The instrument that was used by him in this case is a biological weapon which starts claiming hundreds of life without any cure.

On the other hand, there was a cure for this. The cure can be obtained from any one of the four keepers.

Who are they?
Where do they reside?
What did they have it with them?

In order to find them, Bheem joins hands with Aviva Fein who is half Indian and half Israeli. Before they could get hold of these keepers, Asvattama gets them but there was one last hope.

Bheem finds it at the end as to who that person was.

Did he manage to save the world from the ultimate end?

Read this fast paced thriller which would keep you hooked from the beginning till the end. A perfect way to end it by the author and I must say I was thoroughly impressed with the way the characters were used and the sequence that happens.

A perfect treat for the novel lovers....