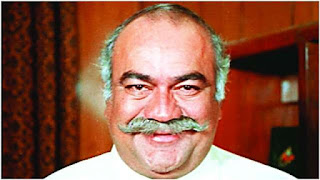 Prem Nath, the iconic villain actor needs no introduction. He ruled the bollywood through his versatile roles in 1970's and 80's. Despite being the most terrific villain, he has also performed as a comedian. Some of his movies like Sanyasi(1975), Karz(1980) would be remembered forever. His career has spread over few decades with some 150 movies to his credit. What made Prem Nath most successful among his peers is his versatility since he showed difference in each and every movie with his style.

It would be surprising for the younger generation to know that despite being cast as a parallel lead in Raj Kapoor's Aag(1948), he chose to become a villain later on, instead of becoming a hero. Being born in November, he also breathed his last in the same month.

To remember this legendary actor and his contribution to the Indian cinema, Zee Classic has came up with new proposition called Woh Zamana Kare Deewana which will air "Prem Nath Film Festival" for 4 weeks starting 11th November 2017. another special feature of this program would be a special feature called "Amar Prem Nath" which is being conceptualised by his son Monty Nath as a tribute to his father.

Being a film maker himself, this program would talk about in great detail about the journey of the actor Prem Nath and how he went on to become India's much-loved villain. Amar Prem Nath would feature the rare interviews of Dharmendra, Vinod Khanna, Manoj Kumar, Dilip Kumar, Shammi Kapoor, Rishi Kapoor, Jeetendra, Shatrughan Sinha, Subhash Ghau, Amrish Puri which were not seen before.

Commenting on the airing of this feature, Monty Nath said, “Even in his time, Dad was a visionary. His approach towards movies was very different. He didn’t want to be the hero, he just wanted to entertain everyone. He soon realised that playing the antagonist brought him real thrill. Amar Prem Nath is my way of showing the world what kind of person my father was, and I am really thrilled to be able to share this film with the younger generation and everyone. I would like to sincerely thank Zee Classic for celebrating my father’s life journey!”

Not many know that Prem Nath was the maternal uncle of the Kapoor family – Randhir Kapoor, Rajiv Kapoor and Rishi Kapoor.

Randhir Kapoor said, “I am very honoured, elated and thrilled that Zee Classic is airing a movie on my uncle, Prem Nath. There never was and will never be a replacement, at least not yet, to the kind of entertainer my uncle was. The fondest memory of my uncle was working with him in ‘Bobby’. I have done several movies with him but this one in particular is very close to my heart. As an uncle, he was very loving and extremely fond of me. I will always be grateful to him."

Shashi Kapoor said, “He would work as an extra for Rs.75. His lunch usually comprised of sugarcane juice and ground nuts. I still remember that he and my elder brother, Raj, would travel in a rickshaw with loud speakers to publicise the play in small towns. Raj Kapoor and Prem Nathji were not only related but also enjoyed each other’s company; they were young and full of enthusiasm. They would say, ‘Come on people, come watch the play presented by Prithvi theatres with famous actors – Raj Kapoor and Prem Nath’. They would seldom mention the name of Prithviraj Kapoor. After getting his first break in the movie Ajit, he had to return to where it all began. When RK films was being conceptualized, it comprised of the theatre group members like Shankar Jai Kishan, Ram Ganguly and Prem Nath himself.”

Rishi Kapoor said, “I haven’t seen any actor emote so well in my entire career. When the tailor brought the clothes for the role of Jack Breganza in the movie ‘Bobby’, Prem Nath uncle looked extremely disappointed and said that it wouldn’t go well with the character.  In a huff, he stepped into the car and drove off. Everybody on the sets thought that he was upset, until he returned an hour later. He was carrying a bag with a very old suit of his and said, ‘This is the suit that will go well with the character of Jack Breganza’. To essay the role of Jack Breganza, he lived among the fishermen to learn and understand the way they live and behave and observe the way they dress. He would really immerse himself into the character he was playing.”

Shatrughan Sinha said, “I have seen many of his films and admired his work like Barsaat, Rustom Sohrab and Aan have been terrific films. What made him stand out was that whatever he did, he was original. He was a very daring, authoritative powerful and an excellent man. He never aped anyone and neither was he jealous of any actor, in fact even the greatest actors would feel inferior to him. They say nobody is indispensable but with Prem Nathji that holds no truth.”

Dharmendra said, “His manliness was often the talk of the town and as college students we would always say that one should have a physique like Prem Nathji. Prem Nathji would do his stunts himself and never used a body double.  For the fight scene with him in the movie ‘Loafer’, he asked me not to use a stunt man and that we would do the fight scene ourselves. I agreed, although I was afraid that he is older to me and may get hurt.”

Dilip Kumar said, “He had the facility to do many different roles. Everybody was elated that Bina Rai and Prem Nath got married.”

Prem Chopra said, “He was highly knowledgeable; you could discuss any topic with him. He was a very dedicated and devoted actor. Whenever given a role, he would research thoroughly to understand that character.”

As you could see from the above,  most of the industry's who's who has worked with Prem Nath and has spoken about the iconic actor thereby recollecting their journey and time spent with him. There are many more celebrities who has spoken about him. It is a perfect tribute by Zee Classic who has decided to come up with this special feature for 4 Saturdays starting from tomorrow. It is going to be a festival for those who has missed it earlier and to those who wanted to rewind their past.

Do not forget to tune in to watch ‘Prem Nath Film Festival’ followed by a special feature Amar Prem Nath at 11:30 AM on Zee Classic every Saturday starting 11th November.