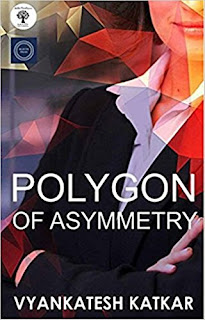 
I have been reviewing Dr Vyankatesh Katkar's book for a while now. The first two books I reviewed differed from one another which you would have read yourselves by now. This book "Polygon Of Asymmetry" is a different book altogether.

In this novel, author has talked in great detail about the life of an orphaned girl as to how much difficulties and humiliation she has to suffer in order to come up in her life. The words that were used and the way events were narrated would make you feel pity and even cry for the protagonist Uma. Uma did not know as to who her father was. All she knew was her mother who passes away due to physical ailments when she was still a young girl leaving the world to take exercise its freedom by clipping her own freedom.

The character portrays the real state of affairs which is happening even in the present day since it is the sex which plays a major role in the exploitation which has become the talk of the town even in the Hollywood after the #MeToo campaign went viral.

Uma gets rescued by a kind soul from a brothel house even before she is being pushed into it and then she faces another humiliation when she thought that she found a solace in a care home. What she does over there was unthinkable but it is very nicely narrated by the author which shows the sheer grit the protagonist had inside her. She then finds a real kind gentleman. Though she falls in love with him, he thinks otherwise as she resembled his first wife.

Was she his daughter?
What happens later?

All these are written categorically making you to keep guessing till the end. I must conclude saying that this is a brilliant piece of work by the author.