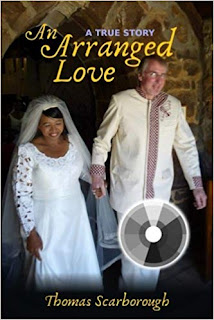 Is arranged marriage a thing of the past? It certainly is, to a greater extent in the West but not in Asian countries, especially in India. It came a real surprise for me when I got this book. I was very much intrigued by the title, as it said,"An Arranged Love". Would this not evoke your interest especially when you live in a country whose culture is very much surrounded by this?

The book is a real story where the characters are none other than the author and his wives. When I say this in plural, you might very well think as to what is happening. I was deeply saddened when I read and came to know about the tragedy that had struck Thomas's life when he lost his beloved wife Mirjam's with whom he was married for 28 years. The separation isn't easy an it cannot be replaced easily since the question here is a life and not a material thing.

Unexpectedly, Mirjam who hailed from Switzerland had named Ester as Thomas's better half once she has gone for good and it was really surprising for me when I came to know that this was the tradition at least until some 200 years back in the England. You read it right. Author who was born to English-German parents had highlighted this tradition and was taken aback when his ailing wife had made her intentions clear.

However, after her demise, Thomas had to move on. He started giving a thought about Mirjam's advice and the rest of the book talks in great detail about how he got married to Ester who hailed from Africa and what were the difficulties he had to face being a White and how the racial discrimination which still exists had taken a toll even on him for being supportive to the dark skinned people.

Being a Congregational Minister, he had to tackle lot of things in a sophisticated manner which he did it with grace and how he was ably supported by Ester who later on became his better-half. The book gains more attention since it had a rich collection of pics(in black and white) which added more value to the story. If you are thinking about getting a color version, it is available too and so as the e-Book.

I feel that this book must be read by all across the globe as it gives importance on family life, bonding, love and affection that is beyond culture, race, religion and customs.