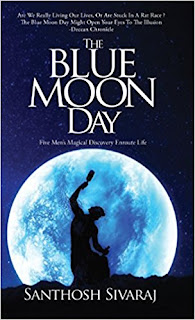 A book with a difference. Though I write reviews for books, I would rarely recommend the readers to buy them and this book is surely in that list. Writing a story is an art and it needs dedication apart from forming the concept and presenting it in the readable form. Though there are editors and proof readers who could make the latter part of my mention, a possible one, it is the core which plays a vital role in the success of any story.

Santhosh would surely make you smile, cry, motivate with his 5 short stories in this extraordinary book. I was deeply moved by each and every one of them as it gave a different dimension and approach in the so called journey of life.

Each story was unique and had a different concept but had struck the chord in a perfect way. Having read few thousands of books till date, these stories did not fail to amaze me. I wouldn't have been that much impressed if one or two out of the five stories were good but when you find the entire book to have such an awesome story line, you would not stop thinking about it for sure. This isn't a flattery but when you read the book, you would understand and agree with my views.

The characters aren't unique as it revolves around common people like us. While one was a job aspirant, another one could not appreciate what life had given to him succumbing to work. The other one was a drunkard though he was a good person at heart whereas another story features two old people and how they meet each other which changes their life forever.

I liked this book a lot and now I am expecting/hoping for Santhosh to release his next set of stories....