Book Review - Elephants In The Room 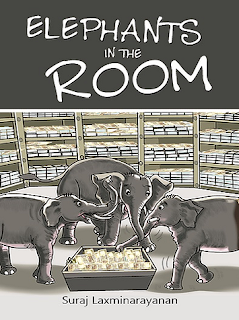 This is one of the novel that would give you the real feeling of reading one. Yes. The novel is a real exhaustive one which runs for almost 600 pages and would surely delight the readers who are in the habit of reading the lengthy ones. To me, this novel would surely fit to be made into a kollywood movie as the story has got all the essence, a feature film would require.

Author has taken great care in describing the series on events in a real elaborate way. To me, I felt like watching a movie as the story reminded of various movies like Chennaiyil Oru Naal, Thoongavanam to name a few since these stories were fast paced and is set to be completed in a day.

I particularly liked the narration of Chennai and its surroundings and also the usage of slang/Tamil words with appropriate translations which has added more glamour to the story.

What would elephants do, if they are confined in a room?

You need to think to get the answer.

By the way, the story revolves around not 1 or 2 but 3 gangs. When the 1st gang which comprises of Nari, Vel, Ashok, Shankar, Assam plans to rob a bank, despite being petty thieves, they weren't sure as to how the events would unfold. They tried a day light robbery by mugging Sid who was on his way home. When the D-Day has arrived, things turns awry when this gang finds another gang with much advanced weapons, who had also come to rob the bank. These robbers find abother gang as well.

Did the robbery take place as planned?

Had all the 3 gangs came with a same motive?

Was this plan foiled by the cops?

You must read this 4 part story to find out more about the story. Like I said this is a real good story which shouldn't be missed.

You can buy the book on Amazon (both Paperback and eBook) and also on Crossword Stores.