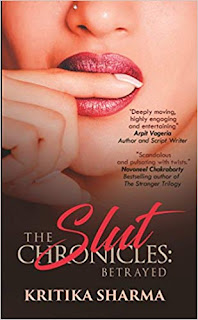 
A story which takes you to the dark past of a famed actress. The story is a real gripping one as it portrays the difficulty, a lady actress has to gone through to become rich and famous. While we get to see only the illusionary image of glam and sham, we wouldn't know their past, which most of the times is filled with so much of sadness and dirt.

Ishana, the protagonist of the story has played a subtle role by defining what the real meaning of a SLUT is. While she became famous as an actress, she opens up her dark past to a journo. It is to be noted that she had never revealed this to any and she started liking him as he resembled her younger brother.

Just like any one else, Ishana had a small family with a caring father and a good brother. Her mother was always abusive scolding and beating her which made her yearn for the love which she got from her neighbor. However she faced the stark but the dark truth of life from Dev & Kunal.

Fortunately for her, she had couple of friends who stood behind her thick and thin - Shiva and Sarv. Shiva is a girl. Sarv is a guy. They never took undeue advantage of their friend Ishana who was simple, elegant and beautiful but had always warned her prior to she getting entangled in complicated relationships.

The story has an unexpected end. I liked the way the story was written as it brought out the misery of an actress making me go back to the #MeToo Campaign which was popular sometime back which was also based on this theme, more or less.