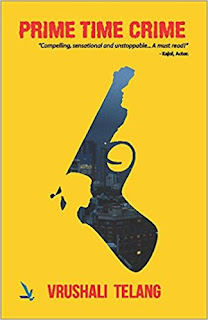 
Bollywood Actor Kajol has mentioned that this is a "Compelling, Sensational and unstoppable... A must read!" which is pretty apt. I began reading this novel last night and I finished it in one stretch. The story revolves around two characters namely Ritika and A.T.

Author has captured the essence of love, aspirations, ambitions without compromising on the twists and turns. Ritika was an aspiring journalist who wanted to make it BIG in her field. Having chosen the crime reporting, she was waiting for her big break. She then gets one. Yes. The golden chance of meeting the sharp shooter A.T. happens and then there was no turning back.

A.T. worked for Khalif Ahmed. They were pitted against a rival gang headed by Usman Ali. There was another threat - Mohan Raswe.

What happens to these gangsters?

Who is Mohan Raswe and what role did he play in the story?

There were other characters which included Babban Mistry, ACP Pathak and Munawar.

The story is set up with such a pace that by the time you finish reading the story, you would surely feel like you have watched a movie. The end was something which I did not expect honestly but it stamps the real intention of the protagonist. I would second the wordings of Kajol - "The story is Compelling & Sensational"