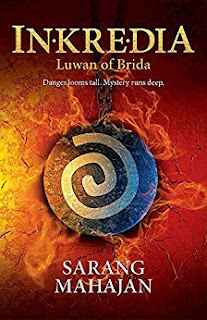 
The story is an Indian equivalent of "Lord of the Rings". I usually do not compare the books/story but as  was reading this book, I felt that it was really well written and closely resembled that of the story penned by J.R.R.Tolkien though each and different - be it with the plot or otherwise.

It begins with a map. I wondered what these Town/Village/Noble City/Imperial City/Kingdom was all about but as and when I started reading it, I could make the connect. This is Book 1 and when it ended, I was glad that I read the book and the story is yet to be complete since Book 2 INKREDIA - The Castle of Tashkrum will be released soon.

I wouldn't go deep into the story since it a simple plot weaved with complex structure of events that makes the story incredible. It all begins with Luwan who refuses to pay tax to Lord Gruwak which forces him to leave his village. His sister Meg joins him.

Before that, Luwan was handed over a book which had some secret powers by his mother. He had not seen his father but had only heard about him. He sets on a journey as told to do so by the book. He gets chased by Ghork Riders who were powerful and wielded extra ordinary powers but gets help from Narjo who helps him in resisting thm.

Just then all were going good, thinks take a drastic turn. Just then, both Luwan and Meg meets up with Kiliarn who promises them to help reach their destination. He had some unbelievable powers and never reveals until the end as to who he actually was.

Did Ghork Riders manages to stop the sibling?
Who deployed them?
Is not paying tax, that much of an offence which made Lord Gruwak to hire the Ghork Riders?
What is the legacy of Luwan?
Where he was set to and why?

Read this story to understand what exactly this fast paced novel is all about?