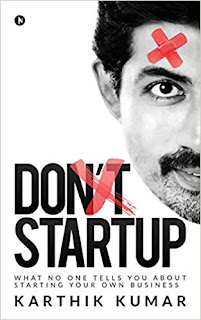 Startup is a common term these days but this wasn't the case some fifteen years back, at least in India. This is when Karthik Kumar along with his friend Sunil thought about one. Unlike others, they dreamt of something unique - a Startup which would concentrate on Stage Shows, Standup Comedy among others. This was unique for sure in the early 2000.

Through this book, he has not only talked about the journey which saw "Evam" which was founded by these revolutionary minds filed for bankruptcy couple of times but had also listed out in detail as to what had worked for them which has saw them comeback more stronger and dynamic than ever.

The book is divided into three acts(Remember, Karthik is a theatre artist and he has written screenplay for several stories/dramas) which I would say is unique. The book also has takeouts and a simple exercise at the end of each chapter within these acts.

We would have read about various elf help books and to be frank, this is the first time, I have come across a book which not only talks in detail about a startup but had also outlined as to what worked for the brand Evam. The foundation on which this was built was rock solid which has braved many uncertainties.

I would surely consider recommending this book because this contrary to its title would help any aspirant to begin a Startup(which is the sole aim of the author as well) as it talks about Time, Money, HR, Culture, Conscience, Toxic Funding, Decision Making, Success and Failure, Innovation, Dilemmas and Investor among others.

Each chapter has been well explained making it very much qualified to be termed as a management book as well. Should you need to Startup something or have something in your mind and do not know who to approach or how to take it further, "Don't Startup" is the book you need to read for sure....

In 2018, significantly more than 29 million persons bought jewelry online daily. So buying and offering jewelry online is a big company and can be massively lucrative! With numbers like... Real Estate