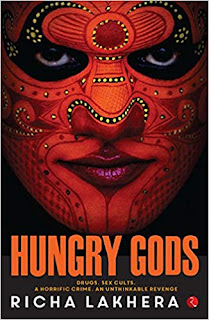 
The book "Hungry Gods" evoked my interest in the very beginning with its cover page since it is the same pic which has been used by Kamal Hassan's "Uttama Villain" movie.
The title yet again needs to understood in its own concept. It is "Hungry" and not "Angry". What would a beast which is in great hunger do? Hunt its prey.

We can also say that a beast which has been inflicted with a wound may also carry the same mindset.
This is what happens in the story. The story brings forth what a reel star goes through in his/her real life. Having a mix of lust, love, envy, relationships given in a equal mix, the story revolves around characters that would keep you guessing as to who the real culprit is, till the end.
The story begins with a gruesome rape of a woman.
Who was she?
Who committed this crime?
Did she have the redemption against this barbaric act?
Then there is this huge pharmaceutical company named Medici which manufactured medicines and tried to sell it at a much higher price than the generic medicine. In order to achieve this, they hire Superstar Neville.
Dinesh Thackray, the director who was in the process of doing the commercials with Neville for Medici gets killed, no one could figure out as to why and how was he killed. Was he pushed out of his office window or did he jump all by himself in which case, it wouldn't be a murder. On the other hand, his daughter Rathi hated his to the core. Was she the culprit?

She was seeing Superstar Valentine. She had to face a challenge from Kimmy White who was also obsessed with Valentine. Kimmy was none other than the spouse of Thackray.

Ranganathan, lawyer of Medici keeps warning Valentine of his action as it may lead to the termination of the contract. He too had his own secrets so as Dorab Silva, the cop who was investigating the death of Thackray.

The story revolves around Este - a prostitute, the superstar who eventually gets kidnapped(there was a dark secret behind his stardom and why was he kidnapped and by whom also forms he integral part of the story).

The crime committed in the past comes back to haunt those who were involved in it, directly or indirectly making them pay for their sins.
The book revolves around the glamorous movie industry before taking us to the cops, a drug manufacturing company among others. I felt the story had a slight shade of story line from couple of kollywood movies which went on to become a hit when they were released.

With regards to my experience in reading this novel, I must honestly admit that I found it a bit difficult to follow the story and the pace in few places. I can correspond this to the movies of Kamal Hassan since he releases movies for class and not for mass. In that sense, the book is a perfect read but otherwise, I would say it is not recommended for beginners or those who would want to seek the help of a dictionary.The flow of the story, as mentioned above, was good and would keep you guessing as to who the real culprit was.

This book would keep you captivated till the end.

This book review is a part of "The Readers Comsos Book Review Program and Blog Tours, for details log on to thereaderscosmos.blogspot.in"