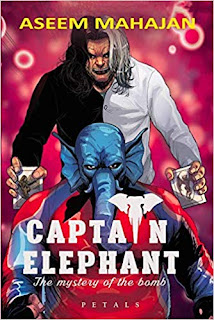 A fiction story which is set in an imaginary island named Pinzoora, Aseem Mahajan introduces us our own Super Hero "Captain Elephant".

Mayas, the protagonist is born with a rare disorder which makes him unique compared to others. He was tall, heavy and this becomes the talking point among his classmates who takes him for a ride mocking his physical appearance.

He studied in a small school which had few teachers and students. Though Mayas was initially sad about his appearance and the attitude of his over protective parents, he soon discovers his hidden strength.

What strength did he possess?

He wanted to take revenge against his classmates and ends up doing something which causes an unexpected agony. While he was taken aback, he stumbles upon a possible terror attack on his beloved island. He along with few good souls(not the real/actual souls)tries to stop it.

Did they success in their endeavor?

Read this novel to find out more. I liked the wit of the author which could be seen throughout the novel. He also has made his stance clear with regards to people who are born with disabilities. I liked the sequence of the story and the uninterrupted flow coupled with unique names like Pintwo, Albert Newton, Tondlulu(similar to Honolulu) to name a few. This story has all the elements which includes love, humor, thrill, emotions, wit and wisdom which makes it a must read.