Book Review - Fluid : The approach applied by Geniuses over Centuries 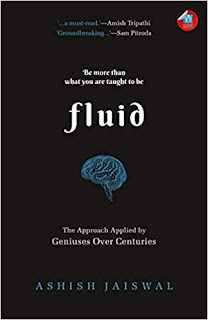 The book brings out the best of what we were missing for centuries. Though we feel proud of boasting about sending(knowledge export)our best people to the U.S and European nation to work in Fortune 500 companies, what we miss out is that these may become redundant in the next 30 years or so.

For over a certain period of time, many educationists have been voicing their opinion about bringing in a change in our present system which makes us to memorize the content rather than reading them and understanding them. We cannot deny the fact that our kids have been taught about answering to the questions. Don't you feel it should be the other way round? That the kids should be taught to ask questions which would improve their knowledge to a considerable level as they would understand more about the subject by digging deep into it.

Ashish who holds a Doctorate from the renowned Oxford University in Education apart from his Masters in the same University has brought out a distinct way of learning which we have been missing big time. He classifies the students as per the World standards as STEM and non-STEM where STEM stands for Science, Technology, Engineering and Mathematics whereas non-STEM stream includes all that aren't covered which includes liberal arts, humanities, history etc.,

Author has compared some of the genius minds in the World as to how they differed among others by showing interest not only in the field in which they excelled but also in the other field which were totally different or at least to us, not connected. This includes Isaac Newton who despite being a great scientist had shown great care over his body that he sports a 6 pack in William Blake's drawing(Pic is given in the book). Leonardo Da Vinci who was the greatest artist of all time took great care in his physical appearance and even in his old age, h designed and wore bright colorful robes which were often worn by younger men during his time.

Sir C.V. Raman who was the recipient of Nobel Prize in Physics is the uncle of another Nobel Laureate Subramanyam Chandrasekhar. Not many knows that C.V.Raman showed great interest in music instrument(Mridangam).

Apple's Co-Founder Steve Jobs did not complete his formal education but that did not stop him in founding the company and the products(iPhone,iPod,iPad) which made the company the First Trillion Dollar Company in the World.

The book has many such references which makes it an interesting read because it would invariably make you think and apply your mind and would not indulge in making your kid confined to your like/mindset making them study Medicine/Engineering etc., just because you were one...