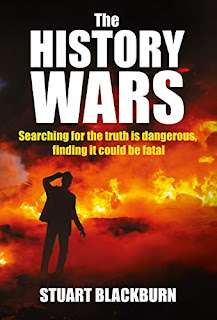 A thriller which is coupled with sudden turn in the events which would keep you captivated till the end. The fact that the story is written by a person who is not of Indian origin deserves a special applause. It is a well researched subject which brings out the stark reality in front of us. I wasn't surprised about the fact that going in search of truth which involves some deep research involving various scenarios would lead to a real threat to life.

I usually do a dissection of the story and various characters on my review but here I wouldn't be doing it as I may end up revealing more than necessary. The story revolves majorly around two characters Ravi, a journalist from Delhi and Peggy, an American researcher.

While Ravi ends up investigating the complicate case of demolition of a mosque, he comes into contact with Peggy who finds a mysterious "Rosetta Stone" gets to know about the crucial information which came with it.

What information was hidden?
How was it deciphered?
How did it go on to endanger the lives of Ravi, Peggy and others?
What role did Mrs K, Mrs Hart, Khan, Sharma, Alan, Professor Hill, Sylvia,Jim and Alice play?

Read this novel which has been written with intricate details making use of all the characters in an effect in an effective way coupled with some unexpected events. Though the novel is little lengthy, I felt that this was very much required without which a proper justification to the story wouldn't have been done by the author.

This book is available on Amazon in both eBook and Paperback version.